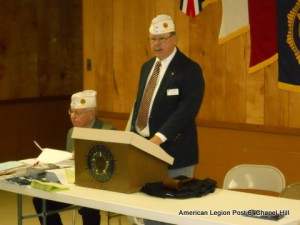 District Commanders and Vice Commanders converged in Chapel Hill to discuss state department business and to share information.  What they learned today moves on to the districts and then to local posts.  Division Commander Terry Chatfield opened the meeting by introducing the many speakers and Ben Lee, State Department Commander.

Ms. Millie D. Veasey, member American Legion Post 157, was singled out by Jerry Hedrick, National Committeeman, as an example of dedication to the American Legion.  Born in 1918, Ms. Veasey attended the Division III meeting, as she does so many other meetings.  Nothing is slowing down this dedicated Legionnaire.  Jerry Hedrick presented Ms. Veasey with a National Commander’s Pen in recognition of her dedication.

Watch this site for a series of news items on topics covered at  our division meeting.

State Department history trivia:  Did you know that Chapel Hill was also chartered as the first American Legion Post in North Carolina?  That is right, they were the first post chartered and for many years they were known as North Carolina Post 1.  Its original charter is dated August 28, 1919. Their yellowed, faded original charter hangs proudly on their wall.  The charter was issued by The American Legion at their new and temporary headquarters at 19 West 44th Street, New York, NY.   The post’s Ladies Auxiliary was chartered in August, 1926.

American Legion Post 6 and District 12, North Carolina
View all posts by chapelhillpost6 »
« National Commander Fang Wong to Address Congress
Follow Me, or Us! »