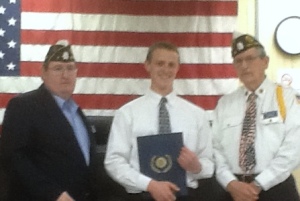 The contest is open to High School and home school students.  Winners progress to division completion and an opportunity to complete in the National American Legion Oratorical Contest.

The contest challenges student to better understand the U.S. Constitution, as well as the rights and privileges of American citizenship.

Alex now represents District 12 and competes against winners from the many districts in Division III.  The contest is on February 9th in Fuquay-Varina. The winning student at the division level receives a $100 division scholarship and then represents the division in a final state level competition.  The state competition winner advances to national.

For the national contest winners, scholarships are significant.  First place award is $18,000 and the next two finishers receive $15,000.  Other national competition first round contestants receive at $1,500 scholarship.

The total amount provided for scholarships exceeded $138,000 in previous years. This is our 76th competition.  Over $3 million dollars in scholarships have been awarded since the contest started.

The Oratorical Contest started in 1934 in Missouri as a means to strengthen knowledge of the U.S. Constitution.

The contest presents participants with an academic speaking challenge that teaches important leadership qualities, the history of our nation’s laws, the ability to think and speak clearly, and an understanding of the duties, responsibilities, rights and privileges of American citizenship. Learn more

Interested in seeing a video of last year’s contestants in action?  It is a good way to prepare for this contest, as competition is extremely keen.  Learn more