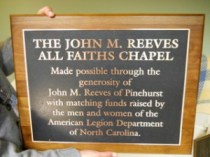 The chapel’s history includes the America Legion financial contributions more than 50 years ago when Pastoral Care began in the hospital.  The wording for the chapel history includes: “this chapel represents continued service to the citizens of NC by the American Legion” and John M. Reeves Family.

American Legionnaires and local veterans are urged to gather at UNC hospitals on October 24th 4 p.m. for the rededication of John M. Reeves All Faiths Chapel.